Even famous nurses make mistakes on social media. Katie Duke, who has a massive following on twitter and instragram, is one of the stars of the ABC hit NY Med. At this point, however, I should probably say “was” a star, since a recent episode revealed that Katie was fired after posting this photo of a trauma room to her popular instagram account (thekatieduke).

The caption for the image reads “Man Vs 6 Train… The after #lifesaving #EMS #NYC #ER #Nurses #Doctors #nymed #trauma #realLife.”

Katie states that when she was dismissed from her job of nearly 7 years that she wasn’t fired for committing a HIPAA or hospital policy violation, but for being insensitive. But honesty, I am not sure what hospital administrator would say this wasn’t a HIPAA violation. I can think of at least two potential HIPAA violations:

The fact that this drama all plays out on a reality show where patients and healthcare professionals are filmed does muddy the waters a bit. Was this patient in an episode? And even if they were, are Katie’s posts protected by the waivers the producers of NY Med no doubt have patients sign? That I am not sure of.

But I am sure that it was a poor choice for Katie to post this particular social update. This type of social media is insensitive and inappropriate. But it’s not the photo, in my humble opinion, that’s the real issue. It’s the caption: “Man Vs 6 Train.” As if the poor soul who encounter that level of trauma was intentionally playing chicken with an oncoming train. The photo itself tells a story. The caption is not needed. And I think that if the photo was the only thing posted, without her personal commentary about a real life tragic event (that she made light of), I think it would have been perceived as harmless and she’d still have her job today.

I often get asked about specific examples of nurses making mistakes on social media. A single Google search for “Nurse fired for social media” will yield you plenty of results. And as much as I don’t like to focus on the negative aspects of social media for nurses, this is one example is being highly publicized and merits a response. It highlights just how easy for nurses to make an error that could cause them to lose their job. And as unfortunate that is is that Katie was fired over the incident, there is a silver lining here. This is a great chance for nurses to learn from the mistakes of of another and put a little more thought into the pictures they take, the statuses they post, and even the times they post them.

Social media can do many wonderful things for nurses. Even Katie has used social media to catapult herself as a personal brand and grow a huge following online. But it can also have big, sometimes unforeseen consequences, even for bold nurses who are on reality shows.

Katie Duke is a no nonsense kind of nurse who has a personal motto of “deal with it.” This time it looks like she didn’t exercise the best judgment when it comes to using social media as a healthcare professional and has consequently been forced to “deal with” her own inappropriate actions.

Still a large part of me thinks this was all for show. Reality TV is never quite reality, and this social media slip might have been a clever move planned by NY Med for major media and nursing coverage, or by Katie herself to further her growing fame. I can’t be certain that this is the case, but it should be considered when looking at the big picture here.

Katie Duke is a passionate nurse who has strong opinions and will no doubt find another job (I’m predicting not in direct patient care) and have continued success. Her social media mishap can (and should)  be a powerful tool that nurse educators, bloggers, and others can use to show how a simple oversight in your online activity can have a damaging impact on an individual nursing career and potentially the nursing profession as a whole.

Update – I was informed that later in the episode it showed Katie Duke working in a new ER and being filmed there. This further suggests that the social media mishap was planned. Even so, the example still has the potential to help many nurses avoid making similar mistakes.

More information about how social media got Katie Duke fired:

This post was written as part of the Nurse Blog Carnival If you are interested in participating find out more details and sign up here. Check out  How Do Nurses Use Social Media for more information this topic. 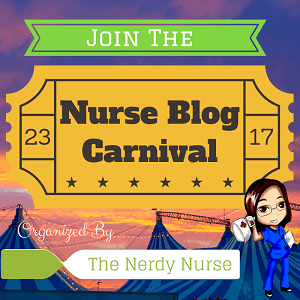