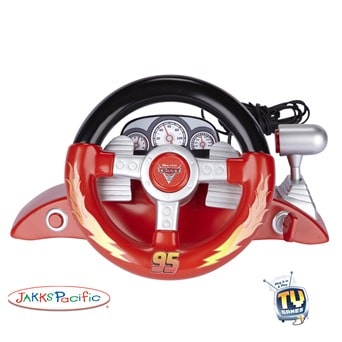 My toddler has developed a great affection for races cars and the Cars Disney franchise. He always wants to go “driving cars” “vrooom vrooom” and ride in my Volkswagen. (He prefers the VW Bug to the Santa Fe on any family outing.) I’m not sure where this sudden love for cars and racing has developed, since my husband isn’t really a car guy and I can’t remember hyping up cars. Perhaps boys just do naturally gravitate towards cars.

I’ve had the pleasure of working with Jakks Pacific before, and they make some pretty neat kids toys. When I had the opportunity to review this $39.99 stand alone video game (Plug It In & Play Disney Pixar Cars 2 TV Game™), I was eager to test it out with my little boy. Although I honestly think the price is a little high for what it is, my little boy just about flipped out when he saw the packaging and has had so much fun “driving cars” since we plugged it in.

When Ty started play the game, and I questioned what he was doing, he informed me that I’d have to “Wait a second,” because he was “driving this car.”

Get plugged in for a super fast ride! JAKKS‟ award-winning Plug It In & Play TV Games™ line-up has a new addition, Disney Pixar Cars 2 TV Games which features the voices of Lightning McQueen, Mater and all new friends and foes. The easy-to-use deluxe steering wheel is great gift for younger gamers, while the non-stop racing and head-to-head action are fun for older Cars fans too.

Grab hold of the deluxe wheel for real steering and driving and activate the gear shift for turbo racing action! Master multiple levels of racing across exotic, international locations, mini games and all new Cars 2 characters, which are sure to thrill every Cars fan! As with all of JAKKS TV Games titles, the controller simply plugs into the A/V jacks of any standard TV and contains multiple games in each controller, no additional consoles or cartridges are needed. (SRP $39.99) Ages 5+

I do wish there was an automatic idle shut off. It runs off AA batteries and we’ve went through a few sets already because he flips the switch on without us realizing and it burns through those precious Duracells even when you aren’t playing. (Toys like this do make me question if there is a secret deal struck between the toy and battery manufactures to force me into poverty over battery expenses)

The gameplay is simple and there is a combination of racing and repair mini games which my 2 year old was able to pick up on and complete easy enough.He’s played the arcade video games with the wheel that he can control, and he always has had a blast with those. Being able to bring home that sort of laughter and joy, has been really exciting. It says that this is for ages 5+, but I think most 5 year olds would find the game play to be too simple and grow bored of it quickly. Ages 3-6 seems more appropriate to me for a game of this style.

If you have a little boy who has gone bananas for races cars, driving cars, and pretty much anything that has to do with Cars (especially Disney Pixar Cars) then this toy would be great for them.

Disclosure: I was provider with Plug It In & Play Disney Pixar Cars 2 TV Game™ free of charge. I was not required to write a positive review. Opinions stated are my own. Links in this post, and other on this blog, may be affiliate links.