Over on Impacted Nurse, the Murses are running amok. They’re busy saving liver… er… elbows and such and giving their pre-Hollywood interviews. 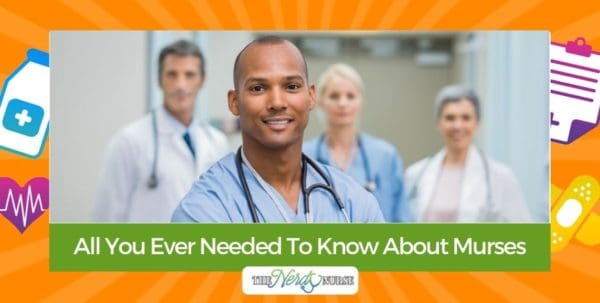 What is A Murse?

They are also a group of YouTubers. The Murses.

Haven’t heard of The Murses yet? Well they are male nurses who are stepping up to the plate and forging a path to potential YouTube success. This EPIC style short film is a clever and quirky nod to males in the nursing profession.

Isn’t It the Man Purse?

But I really like what Murse Mike and others like him are doing on social media. They are using humor to bring awareness to a very serious experience: being male in a female-dominated field.

I have written about my great affection for male nurses in the past. There are so many stereotypes they are forced to combat on a daily basis just to practice the art of caring. It is exciting to the love for this profession shared in a comedic way that both males and females, nurses and non-nurses can appreciate.

Wonder what will be in part to?

Personally, I think it should involve a cameo by The Nerdy Nurse herself, but I don’t think they’re up for on-location shoot yet. Alas, our comedic geniuses may not collide on film in the near future, but you can certainly enjoy what they have already created in the video above.

Some male nurses have a fantastic sense of humor and really enjoy the play on words. It gives them something to laugh about and uses humor to point out the stereotypes.

Some male nurses just want to be called nurses. By using a different word for a male nurse, they think it is giving attention to something that needs to become normal. All nurses should be just that…nurses. A female nurse is a nurse. A male nurse should be called just a nurse.

Male nurses fight stereotypes every day. This is a field that is predominately filled by women. Do you remember the movie Meet the Parents? The main character, Gaylord Focker was a male nurse. And his future father-in-law sure laid out all the stereotypes murses face.

Here are some of the most common stereotypes murses fight to overcome:

I admire all murses – male nurses. I like using humor to take the power away from bad stereotypes. I hope more men step up and choose nursing as a career.

Here are more articles about nursing careers and how you can become a nurse.