I switched to T-Mobile and my only regret has been that I didn’t do it sooner. 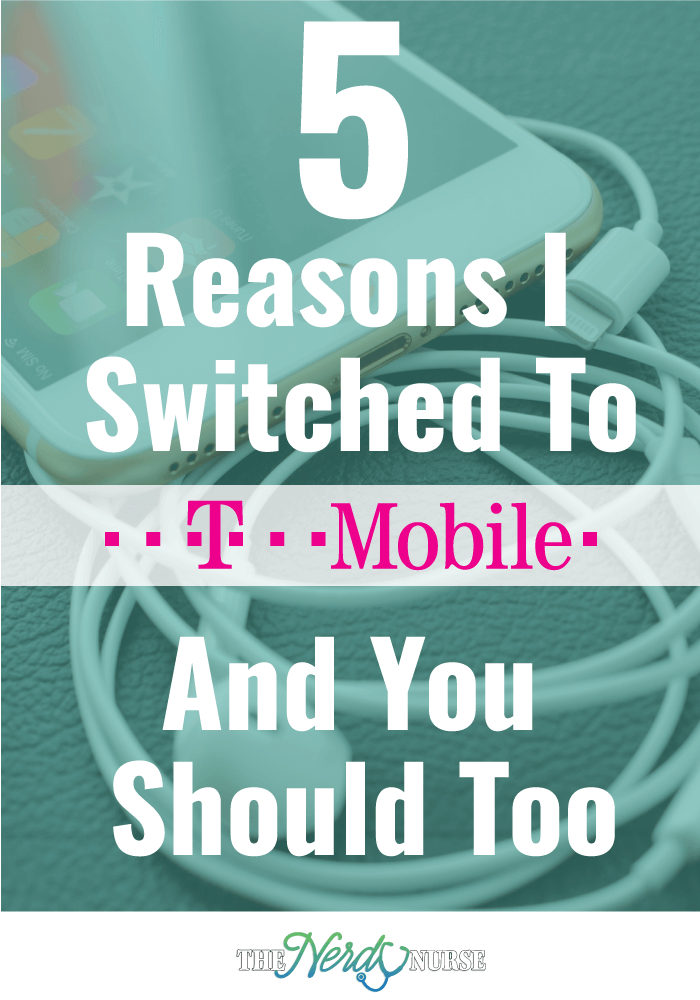 5 Reasons I Switched to T-Mobile

Breaking up with your phone company can be similar to ending a relationship: you ponder the decision for a while, you reminisce about all the negative traits that get your blood boiling, and you sit there at the end of the day and wonder if there’s maybe a better option available… one that just fits your lifestyle and needs a little better.

That was my story when I broke up with one national phone company and starting discussing what I needed with T-Mobile.

The other national carriers wanted such a commitment from me! I chose to go with T-Mobile for a variety of reasons, and now a year later I can say that I’m truly happy with them as a company, and what they have been able to offer me during our relationship.

In the past, T-Mobile had a reputation of not having the best coverage. Things have now changed dramatically. As of the beginning of 2017, T-Mobile now covers 99% of Verizon’s coverage. In the past two years, T-Mobile has doubled their 4G/LTE coverage and is consistently ranked the fastest nationwide. In my experience, I often have coverage where many people actually do not. Not too long ago, I was in a very (very ) small, rural town out west. The hotel front desk woman told me I would surely not have reception, but I had a landline in the room if I needed to use it.

I had a full five bars of great reception. Thank you T-Mobile.

If for some reason I didn’t have reception, though, I would’ve been fine because the hotel had wifi. With T-Mobile, you can call and text over wifi, so that if you don’t have cell coverage but you do have a wifi connection, you’re still not disconnected like you would be with other carriers. This is also huge when working with patients. As a nurse, we use our phones all the time, but the bowels of hospitals do not have the best cell service. Connecting to wifi makes it so that I can still use my phone at work no matter where I am.

Other carriers make their plans so confusing. And then at the end of each month, I would have a different priced bill from the month prior. When I would investigate, all I saw were added charges and fees that I didn’t even know existed. I would also have to watch very closely how much data I would use so I didn’t get charged extra by going over.

T-Mobile is the opposite. Every month, I get the exact same phone bill. There are no hidden fees, no added extras here and there. It’s incredibly transparent and predictable, and it saves me the hassle of trying to correctly budget my phone bill each month. Not to mention that their plans are by far the most affordable on the market.

There are a number of plans with T-Mobile that offer very fast and unlimited data. There are other plans that have a maximum amount of data that you can use on the fastest speed, and if you go over that limit (ie 2GB), you don’t get charged; you just continue through the rest of the billing cycle with a slower speed data. You have a lot to keep track of and monitor in this life, like patients heart rates; continually monitoring your data usage shouldn’t be one of them.

[easy-tweet tweet=”I switched to T-Mobile and my only regret has been that I didn’t do it sooner.”]

Maybe I have commitment issues, I don’t know.

Trust me, I’m not leaving T-Mobile any time soon, but I just feel like my phone company shouldn’t keep me tethered and they should respect me enough to not demand a commitment. If you were to switch to T-Mobile and not like it (though I know you will), it’s really nice knowing you’re not stuck for two years in a dead end relationship. And if you’re anything like me, you already have so many commitments in life, and your signature is on quite a few dotted lines… having one less is such a sigh of relief.

Oh yesssss. This one is probably my favorite.

I had a friend with T-Mobile that got lost on an international trip. While not a terrible place to get lost by any means, it was also starting to get dark and they were getting hungry. They just whipped out their phone and pulled up the map. The data worked wonderfully overseas, and lead them straight to my hotel room and then straight to the gelateria. T-Mobile overseas data has revolutionized the way you can travel abroad.

Did I mention that this was free?!? Free.

What if you’re homesick in the middle of  Melbourne? With T-Mobile you can call your family back in the States. Now that phone call will be about 20 cents per minute, but it’s a small price to pay for a little slice of home. For the rest of the trip, you can text them for free. Yes… free. No other national carrier has such privileges.

In conclusion, there were quite a few reasons I decided to switch to T-Mobile. Towards the end, though, I was simply tired of exceedingly expensive phone bills that just didn’t make sense. T-Mobile is simple, you know what to expect, their customer service is great, and their plans are affordable. Text me when you’re standing on the Great Wall of China and tell me that I was right.

Switch to T-Mobile and Save

T-Mobile is always running great promotions including discounts on handsets. You can get a smartphone for under $100. Switch to T-Mobile and you can save while still getting great reception. Oh- and their customer service is PHENOMENAL!


Check out other great technology resources: