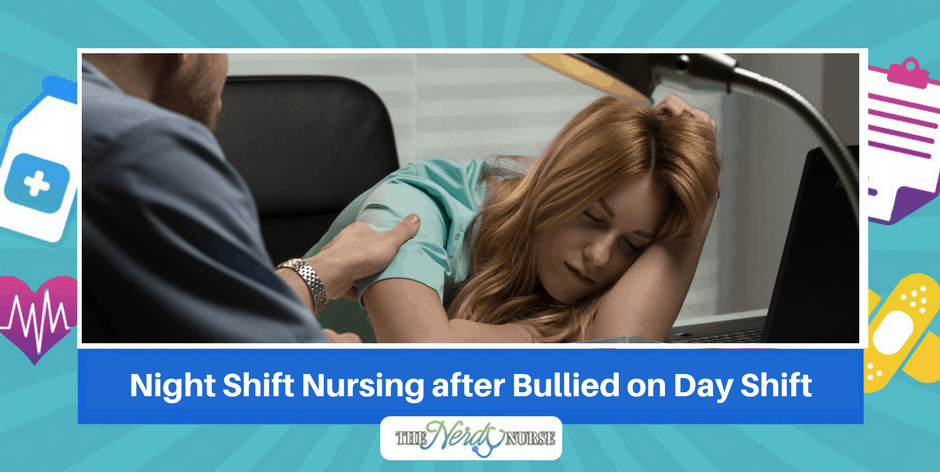 I have to say that I never thought I would work at night. Night shift nursing was always something that scared me. I just never thought I’d be able to stay awake all night. I mean, your body is programmed to do the exact opposite.

I remember in my initial interview process that it was one thing I specifically requested to avoid. As much as I understand that many new nurses often have to earn their first shift position, this is not the case at the hospital where I work.

Originally I accepted a weekend days position with a fairly large shift differential. This was nice for me, being a brand new nurse, as It made a huge impact on my paycheck. It was hard. Patients are so much sicker on the weekends. Obviously, most doctors do their best to send people home on the weekdays when they round so that their counterparts who are covering for them over the weekends do not have so much on their plate. That meant that almost all the people who were left were sick puppies. You also have far fewer resources and the general consensus among administration seems to be that you should just ‘make do.’

It also was made difficult by several of my coworkers who constantly portrayed themselves as flawless. I am a nitty-gritty, down and dirty, tell me how it works kind of girl. I can’t take things at face value if they don’t make sense to me. It is not that I think my way is the best, but I need to be shown why your way is better than the method taught to me in school, or that I fabricated on my own.

But this was not understood by the nurses I worked with. Anytime I asked any of them a question, they assumed I was questioning their judgment, especially the two LPNs I shared a shift with. Unfortunately, no one on that shift was exceptionally experienced. The two other RNs I worked with had only been licensed a year longer than I had. The two LPNs, while often claiming longer, had only been licensed a few years, and apparently, both of them were very defensive about their credentials.

It was lateral violence at it’s worse.

Forced to Switch to Night Shift

After two years of fighting teeth and nail to stick it out, the charge nurse threatened me with bodily harm. I contacted the house supervisor, my boss, and HR. The end result… I was forced out of my shift. Why? Well apparently the squeaky wheel gets the grease and regardless of the fact that nearly everyone else in the entire hospital was perfectly happy to work with me, glad to see me, and enjoyed my company, these 5 women won.

The proved that there is definitely strength in numbers, regardless of who is trying to do the right thing. All I wanted to do was work my shift, be helped when I needed it, be guided when I needed it, and to be treated with respect. Instead, every day it was made clear to me how incompetent they all thought I was. I was told on many occasions that they had no desire to be friendly to me. They would literally dance on top of the nurses’ station if I got pulled to another floor. Like… seriously. I wish I had photos. I was never included in any events they planned. As much as I didn’t want to need to feel included, I wanted to be at least offered the courtesy of an acknowledgment. I mean, when the 5th nurse would come to lunch,  they would pull a chair from my table over to the other table just to avoid sitting with me.

After meetings with HR, and what I can assume was not disciplinary action on my coworkers for their threats and mobbing behaviors, my boss told me the only viable thing was to move me. The only position available was night shift.

Just the thing I had avoided and told her specifically I was fearful I could not do. I was sure this night shift nursing business was not for me.

However, it has really been a breath of fresh air. For the first time in two years, I get to consistently work with smart, funny, competent women who are glad to have me in their company. Many of them, who are very seasoned nurses, look to me even for advice or help. They call me smart. They laugh at my jokes and they tell me they don’t know how I dealt with all the stress I did for so long. It is nice to work with people who don’t hate me.

For the first time, I feel like I can take care of my patients appropriately. I know that help is available when I needed it. I know that my patient assignments are specifically to make me struggle. I and thankful to be welcomed and accepted and appreciated. I finally feel like I can be the nurse I want to be and that is very satisfying.

As much as I know my boss did take advantage of me in the matter, it really has been for the best. I only wish she would be more proactive in protecting her employees and actually managing the department, but then again I have always been a dreamer.

These night shift nurses are pretty awesome and are helping to repair the damage done by my 1st two year on the floor.

3 thoughts on “Night Shift Nursing after Bullied on Day Shift”