Most of us understand the reasoning for CAPTCHAs, but they are seriously stealing the joy from the internet.

In case you’ve been hiding under a rock somewhere and have missed this up rise in the human authentication process, here is a description of what a CAPTCHA is and done, thanks to captcha.net

But for the love for Pete can they do something about just how ridiculously difficult they are becoming to interpret for HUMANS!

The following are CAPTCHAs that were generated when I was trying to make a comment on a blog at nursing-blogs.com.

Now these, honestly, I can tolerate. At least I know what is supposed to be there. If I don’t have to guess between letters and numbers, there’s considerably less frustration to be had.

Punctuation, Capitalization, and Even Less-Legible CAPTCHAs

Here’s where my blood starts to boil. Having to type in upper and lowercase is irritating in these little boxes. Then you have to add numbers. Fine. But PUNCTUATION?!?!

What the cow, man?

It’s not enough you have to have me trying to figure out your variables of letters and numbers but now you have to add commas, parenthesis, and semicolons to the mix?

Are you trying to give me a nervous breakdown?

Legible-If-I-Squint but with Unrecognizable characters CAPTCHAs

Just when you’ve finally got a series of letters and/or numbers you think you can decipher, they throw in characters that aren’t even part of the English language.

Like what the heck is that X thing, after the Sa? And how the crap am I supposed to put a dot over a C when I’m typing it out. Seriously… Seriously?!?!

And what on earth is that little squiggle hanging off the side of that n right there? and is that a little t next to that big T?

Ok. So I don’t actually know that CAPTCHAs and Free Masons have anything at all to do with one another. In face, I’m sure if you ask Giorgio A. Tsoukalos he’d probably say that CAPTCHAs  all come from “Esstratresrials, ” which is “Extraterrestrial” for those of you who don’t speak the language of the hair.

But these CAPTCHAs are the Mac Daddy’s of the bunch. They are combinations of Pictures, Letters, Numbers, Unrecognizable characters all smashed up into one dainty little CAPTCHA.

If there is one thing that will drive me away from engaging in your website, it’s a CAPTCHA.

Use a comment spam filter. And for the few comments that squeak by those, well you can pick through those by hand. The sanity of humanity is in your hands people, do you want us to be driven mad?

Please, pretty please, if you have any ounce of appreciation for my sanity and the sanity of all internet patrons alike, SAY NO TO CAPTCHAs!

Who hates CAPTCHAs as much as I do? Comment below with your CAPTCHA horror stories. 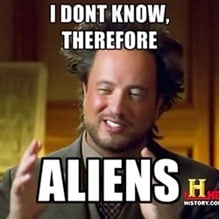 P.S, If you don’t know who my main man Giorgio A. Tsoukalos is, you seriously have to catch up on some Ancient Aliens. Then you can have fun making your own internet meme out of Giorgio, his hair, and alien references.

4 thoughts on “CAPTCHAs are Killing the Internet”