I do not think there will ever be any a real robot nurse. That’s not to say that robots won’t enhance nursing care, but a human will always have to be a part of the discussion.

I read a story on Girl Meets Geek about Brick Walls. It’s based on a post from on wolfhirschhorn.org: THE REAL STORY ABOUT WOLF-HIRSCHHORN SYNDROME.

In summation, there is a little girl who needs a kidney transplant. The doctor refuses to do it for “quality of life” reasons, while also stating that the little girl is “mentally retarded.” But it’s not just a transplant that she will need, it’s lifelong care, another transplant in 10 years, and likely a future filled with pain, suffering and a full on medical circus. The doctor and the social worker are attempting to explain the reasoning to the devoted parents of this child, but both sides are hitting a brick wall.

A Robot Nurse Cannot Be Professional and Rational, Parental and Emotional

I can see both sides of this story. As a professional, I see the need to make a rational decision based on evidence and fact, but as a parent, there is a very real need for this decision to be based on emotion.

The doctor really is trying to make the best decision for the child in question. He has the rational perspective of an outsider that is following guidelines, standards, and data. He is making a decision based upon medical facts and known impacts of the procedure. He is making the “right” decision from a modern medical perspective.

As a parent, if someone told me my child could not have a life-saving medical procedure, I would probably punch them right in the mouth. There is no telling what incomprehensible language might pour out of my mouth as I tear them to pieces and and explain why my child will have anything and everything they need. As I explain to them that they have no right to judge the quality of my child’s life. They have no right to make a life or death decision for my child.

But then what about my child.

My child who is too small, too impaired to have a voice in it all.

I am blessed to have a child free from a disability, so I cannot even begin to address the level of emotional complexity that this adds to the ordeal. I can’t imagine having to fight for every medical treatment because of ailments that my child suffered. I just cannot imagine that. They’ve already fought so much for their little girl, why on earth would anyone expect them to give up the fight now?

As humans, we have to be rational and emotional all at the time. 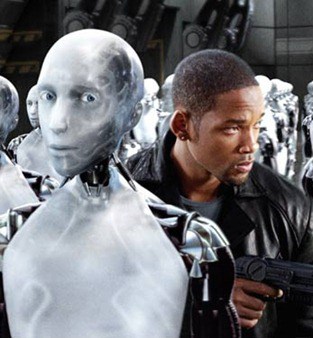 Something that demonstrates this eternal drama is the Will Smith movie iRobot.

He doesn’t hate the robots because he thinks they are out to get us. Well, at least not initially.

Any human would have choose to save the girl, given the choice. At least, that is what you would assume/hope would happen.

But that’s not what we are trained to do in the medical world. In a disaster circumstance, we are trained to triage. You literally have to choose who lives and dies based upon acuity. You play God. Even if someone is alive, you can only save 1 person, you choose the person with the best chance of survival. You can’t even waste one second on the person who is likely going to die, that may cause everyone to die.

But Will Smith’s characters feels like he caused the girl to die because he was there and a robot made a rational choice. He got in the way of giving the girl any chance to live. He was the causality in the disaster with the greatest chance of survival.

Because of this, he doesn’t trust their judgment because he doesn’t feel that the robot put what most humans would put first.

I don’t know if he thought to consider what might happen in a EMT had been there and dived in the water. Who would they choose? Would they make the rational or the emotional decision? Would their training or their humanity take over? Would they save the person they knew they could save or the child?

Who can say really?

The bottom line is that it’s all in an effort to do the right thing.

Do Nurses Separate Their Emotions From Their Practices?`

Do you separate your emotions from your nursing practice or is your nursing practice based upon your emotions? Can we separate the our caring acts from the the emotion of caring. Are we careful to be aware of how much we becoming invested in the care we perform to prevent burnout and fatigue? Are we kidding ourselves if we even try to not get emotionally involved with our patients?

We are not robots.

We make rational and irrational decisions and can almost never entirely separate emotions from the equation.

In this particular incidence of rational versus emotional, both parties are doing the “right thing.”

2 thoughts on “Why the Robot Nurse is Pure Fantasy”