Apple did something very innovative and snobby today. They broadcast their keynote speech online, live, for mac users only. You could watch it via iphone, ipad, mac on safari, but not on pc. Snobby. But hey, they are Apple and they do it the way it should be done, and by gosh you’ll learn to love it. I sure have (I <3 my iPhone).However, the viewing of said speech has brought me to a striking realization.

I am starting to realize that Hollywood, and one specific actor in particular, is trying to tell us something about Apple, Mac, and Steve Jobs. 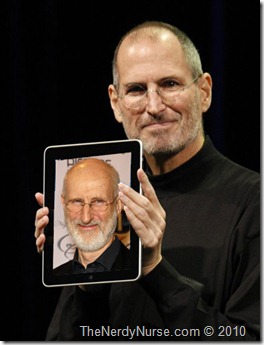 You see, surely futuristic action films such as Surrogates and iRobot cannot be merely for entertainment value.  No, there is some reason why there is a  gentlemen who strong resembles a certain leader and public face of a certain technology company who just happens to be releasing some of the most innovative, intuitive, and think free (a good thing too, because they don’t want you to mod them in any way!) devices that have revolutionized the way we communicate and play.

This is bigger than just cinema. This is bigger than just Bruce Willis and Will Smith. (Is that even possible?) This, ladies and gentlemen, is James Cromwell and Steve Jobs. Or maybe its James Cromwell verses Steve Jobs. I think maybe, just maybe that by playing a similar character in these movies, that is both of these films sacrifices himself in order to save the world from the horrible oppressive technology he created, that maybe, just maybe, James Cromwell, and the powers that be, are sending us a message. Its not enough that he bares and striking resemblance to the tech guru recluse, but he has to play him (well characters obviously based on him) in so many films? 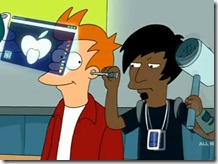 I am also pretty sure he has wrangled in the Futurama creative team in on it as well. I don’t know about you but I’m really looking forward to the Eye-Phone and I strongly hope that Apple takes the idea and runs with it. You know it can be such a daunting task to actually hold your phone, especially since there are only certain ways I’m supposed to hold it.

I am surprised to see that others have not caught onto this sooner. After a deep Google search (all of about 30 seconds), I cannot find anyone who shares this revelation with me. Surely you are out there. Come forth and show yourself!

So what does this mean to us?

Where is Keanu when you need him?

What? We already have to do all that? Oh, yea, my bad… Then lets just celebrate and enjoy this technology. I mean really, we only have a couple years until 12/23/2012 anyways, so we might as well enjoy or gadgets while we can. Surely in 2 years time Apple and Steve Jobs won’t be able to completely take over the world through technology, and even if they do, would it be such a bad thing.